The "Sporting Chance" school of gardening 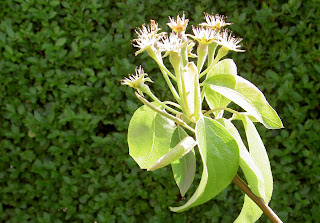 In this shot is something which Lunchista hopes really will turn out pear-shaped: the more botanically-inclined viewer may be able to identify pear-blossom which has just set. But it very nearly didn't happen.

Sometimes the things you buy for the garden with the best of intentions, just drop all their leaves and sit there looking to all intents and purposes as dead as the proverbial Parrot. Or, having justfiiably looked dead all winter, they fail to come out in the spring. This has happened quite a lot in the Lunchista garden, usually to things that were expensive to buy, such as:

A lemon tree
A climbing peach
A grapevine
Some miniature roses
Countless seeds, berries and nuts that go into pots just for the heck of it.

One of the first victims was the pear-tree. We'd planted seven fruit-trees during our first winter here, and in the March they all showed buds. Then blossom in April, and leaves in May. All, that is, except the pear-tree, in spite of the fact that it had received the same TLC as all the others. Lunchista couldn't bear to dig up a tree, so we left it there, its bare branches giving us two fingers every time we looked in the garden. Until June, when it suddenly decided that having no leaves was a bit of a career limiting move, and as they say in the USA, "got with the program".

The lemon was a bit more dramatic: it suddenly decided to drop a full set of perfectly good leaves in the middle of summer, and remained leaf-less for the rest of the year. Then when we fed it some lemon-food the following spring, it put out new leaves. In the autumn. By then it had cobwebs on, giving its dead-ness that extra Gothic touch.

Apparently plants can go into shock. They "play dead" because they're too dry. Or too wet. Or lack some mineral or (more probably) sunshine. The same thing happened to the other plants in our Rogues' Gallery above (all except the peach, which after six months we decided was genuinely dead: its branches were completely dry. You can't win them all.).

And so evolved the Sporting Chance School of Gardening. I'd always thought it was a bit barking and wondered why I did it, but now I've discovered something of a justification, from the world of high finance of all places.

Nassim Nicholas Taleb was one of the very few traders to emerge from the 1987 crash with a positive result. A large part of what enabled him to do this came from his understanding of the patterns of highly improbable events, in particular the difference in the statistics behind ordinary physical things, such as for example the heights of pear-trees (which typically have a Gaussian distribution), and human-made ones, such as gains from inventions taking off, or losses from markets crashing or wars breaking out. These typically follow something more way-out, like the wealth-distribution curve found by Wilfredo Pareto, in which it is possible for one individual's contribution to tip up the entire table.

After describing all this in eloquent detail in The Black Swan, Taleb then poses the question, on behalf of the reader, "So what do I do now?" Part of the answer is to go to parties: you never know who might be there and end up putting you onto a "positive Black Swan", that might really take off. Another part of the answer deals with the more pedestrian parts of life.

The Strategy is to split your resources (time, wealth, space in your garden...) 85:15, in fact very much like Mr Pareto's 80:20. Put the 85 into something (apparently) rock-solid, or at least boringly conservative. Then take the remaining 15 and put it into something which, though it's very probably going to just sit there doing nothing, might just take off and land you a good result. Something, in fact, like an apparently-dead pear tree.

The real art is to line up the two sets of assets in such a way that any improbable event causing the loss of the 85% will also result in that remaining 15% coming good in spectacular fashion: for example an entire row of pear-trees. Lunchista assumes this is why this type of investment is known as a Hedge Fund.
Posted by Lunchista at 15:10

Why are we all here?

Contemplating the many wonders of a year without a job: I wonder how we'll get by? I wonder what new and interesting things are happening in our neighbourhood? I wonder if the idea of paid work is all it's cracked up to be? And I wonder what I'll have for lunch...